It’s a question that has puzzled parents for generations: why do babies smile in their sleep? Some believe it’s a sign of a happy and content baby, while others think it might be a reflexive response to dream content. However, the actual reason behind this mysterious behavior is still unknown. Let’s explore this with Repopny!

Infant Smiles While Sleeping – What Does It Mean?

As a new parent, you’re used to staring at the sleeping bundle you’ve brought into the world, but you never expected to see your kid smile back at you while they’re asleep. Your initial emotion could be overwhelming love and affection, or it could be amusement.

But then you wonder, “What made my newborn smile while sleeping?” “Does it have any significance?” We help you understand why newborns grin while sleeping by addressing all of your sleep smile inquiries.

Why do babies sleep with a smile on their faces? We don’t know exactly what causes it, but we can start by learning about sleep and its stages. Both infants and adults go through two stages of sleep. 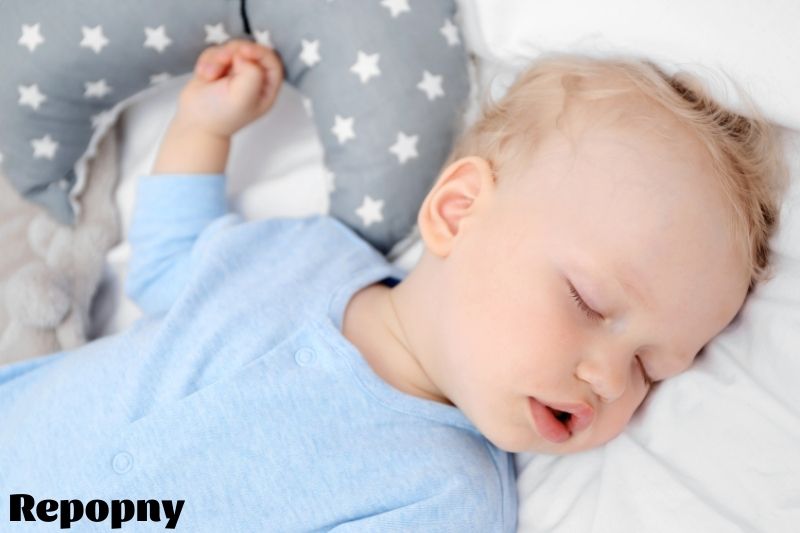 You go through many cycles of REM and non-REM sleep during the night. The NREM phase, which comprises three stages, is when babies start their sleep.

Stage 1: Your baby will transition from being awake and weary to dozing and finally sleeping in this stage. It’s only a few sentences long. Breathing becomes slower, muscles relax, and brain waves slow. In this period, it’s simple for your infant to be startled awake by noise or movement.

State 2: Your baby progresses to a stage of light slumber. Their breathing and pulse rate slows even more, and their muscles relax even more than before. With irregular periods of activity, eye movements under the lids stop, and brain activity slows.

Stage 3: This is the deepest stage of NREM sleep, during which your infant remains calm and motionless. His heartbeat, breathing, and brain waves are all at their slowest. It will be more difficult to wake him up because his body is in a state of dormancy. His body will heal and renew tissues, create bones and muscles, and boost his immune system throughout this crucial deepest phase.

Smile Reflex in a Newborn

Your infant may smile, giggle, twitch, whine, cry, or leap while sleeping in the ‘REM’ phase. Because it’s impossible to tell whether babies dream, it’s assumed that when they grin or laugh in their sleep, it’s more typically a reflex than a reaction to a dream.

Many studies, for example, have noted that during active sleep, babies may twitch or smile. When babies sleep like way, their bodies can make uncontrollable motions. These involuntary movements may lead to sleeping grins and laughs.

Maybe you also need: Why Do Babies Cry In Their Sleep?

Some critics doubt that babies can have substantial dreams in the same way that adults are. Past events, experiences, and interactions all play a role in our dreams. They also include conversations and feel who we are and who we know or makeup in our heads. A newborn lacks the mental abilities required to make up complex things like dreams.

While babies grin and laugh while sleeping throughout the early months of their existence, it is merely a subconscious response from their brains, which occurs most frequently when the baby is tired or in the REM periods of sleep.

There have long been indications that infant smiles might, to some extent, transmit happy emotions. Smiles have been observed in the first few days of life due to the cheek or belly rubbing. Sweet tastes and scents make newborns grin as well.

Their developing brains are assumed to capture all of their everyday events while awake, which are processed when they sleep. Smiles or laughter in their sleep may reflect the pleasurable emotions felt while soaking up these new experiences. As a result, they were smiling or laughing while sleeping is regarded to be a regular aspect of the development of their human emotions.

While “sleeping baby” grins can be attributed to the development of emotions or the REM sleep cycle, there are other sorts of smiles. Yes, babies have a variety of grins, each with its meaning, and these smiles arise at various times throughout their life. If a newborn baby smiles while sleeping, his smile might be classified as Reflexive, Responsive, or Social.

Smile with a Reflex

When do babies begin to smile, you might wonder. Your baby’s first smile might be seen as early as 0 to 6 weeks. Your baby will show transient smiles while sleeping in the first few days after birth. Your baby’s body goes through physiological changes during REM that activate various reflexes, one of which is smiling.

Experts believe that these early grin episodes in babies are reflex behaviors comparable to other newborn baby reflexes such as sucking and rooting. These reflexive smiles are nature’s way of allowing your baby to practice new skills without being triggered by emotion.

Reflex grins can occur between 25 and 27 weeks of pregnancy when the baby is still in his mother’s womb. Reflexive smiles are most common during the REM sleep phase after birth.

When your baby is around 6 to 8 weeks old, he’ll begin to smile in response to sensory stimuli he enjoys, such as cuddling, familiar voices and faces, the warmth of his Woolino sleep sack, and so on. Expect nothing at this point because his smile is a reaction to sensory events rather than a social response.

Smiles and laughter as expressions of delight are only learned later in life, around months 3 to 4 or even later. Responsive grins are not social reactions, as much as you’d like to think of them as proof that you’re the finest mom in the world.

You can still try to get your infant to grin by giving them plenty of opportunities to look at your face as you chat softly. Responsive smiles can teach you about your baby’s likes and dislikes and what makes him laugh or smile. If you replicate his facial expressions, he may begin to emulate yours.

Your infant should be at the social stage of wanting to connect by 3 to 4 months. His newborn smiles had been internal reactions to items that had captivated his interest up to this time.

He can now recognize you as his primary caretaker and will smile at you when he sees you. He’ll also be able to respond when you make amusing noises, and he’ll learn to elicit a response from you by smiling. You’re, without a doubt, his favorite now.

The idea that a baby’s grins indicate that he is passing gas is unsupported by scientific evidence. Nonetheless, it is common knowledge that colicky newborns are irritable, and farting relieves them and makes them feel better. As a result, one of the reasons your infant smiles while sleeping could be that they are passing gas.

It’s rare to be concerned about your baby smiling while sleeping. However, you should see a doctor if you experience other symptoms such as weight loss, sleeping problems, irritability, or laughing for no apparent reason. Convulsive laughter bouts might disrupt your baby’s sleep and harm his health.

Remember that your kid will not always smile when you want him to and that he will have to show other emotions as well. Tell your pediatrician if your kid isn’t smiling at all by 12 weeks so he can look for developmental delays.

If you are worried about your child fighting when sleeping, see our guide: Why Do Babies Fight Sleep?

Babies grin on the spur of the moment, without meaning to or in response to anyone or anything. As time goes on, you may observe your child smiling when passing gas or stool, maybe due to the pleasurable sensation.

Sensory reactions to taste and smell have also been observed in newborns. When babies come into contact with a fragrance or taste that they enjoy, it’s not uncommon for them to smile.

You may see your baby smiling when they see a familiar person, or possibly because they are aware it will elicit a response from you as they get more comfortable with their environment. However, there is still some gray area for babies smiling while sleeping.

Given that we have no means of knowing whether or not babies dream or what they dream about, it’s safe to assume that their smiling, which frequently occurs during active sleep, is a reflex activity that is almost undoubtedly involuntary.

However, if babies do dream, a grin in their dream could be a reaction to a memory from the day or a series of events conjured up by their subconscious.

Could A Baby’s Smiling Be A Red Flag?

It’s always a thrill to catch a baby’s smile while sleeping. However, there are a few times when this smile could signify something more serious.

Gelastic seizures are a type of epilepsy that is highly infrequent. Uncontrollable bursts of laughter are a common symptom of this illness. It sounds like laughter may be accompanied by the face contorting into a smile at times. Flushing, a quick heartbeat, and changed breathing are possible symptoms of gelastic seizures.

These seizures are incredibly uncommon, accounting for less than 1% of all epileptic episodes.

7 While this sort of seizure is uncommon, if you suspect your kid has one, seek medical attention right once.

How To Make Your Child Laugh

It’s simple to catch your baby smiling at one object or another as they become more aware of their surroundings or simply expressing joy that you are there and present with them. Your baby’s smile in response to events is also a strong indicator that their senses are functioning properly as they use them to become more aware of their surroundings.

These are highly wholesome times, so it’s understandable if you want your kid to grin frequently. While it’s wonderful if your kid doesn’t smile as often as you’d like, there are a few things you can do to encourage them to smile more:

Studies show that young babies might be able to smile spontaneously, regardless of whether they are asleep or awake. This means that smiling during sleep might not be such a rarity.

However, it is important to remember that smiling while awake is just as important as it is while asleep. Like all of the others, this feature is there to develop their coordination and control. They should not be allowed to do it without an adult’s supervision!