Can sleep apnea kill you? There are many dangers associated with sleep apnea, and one of the most serious is that it can kill you.

When you stop breathing during sleep, your body is deprived of oxygen, leading to serious health problems, including heart disease, stroke, and high blood pressure. If you suspect that you may have sleep apnea, it’s essential to see a doctor to get treatment and protect your health.

There are three varieties of sleep apnea, but the most common is obstructive sleep apnea, which affects most people. Because the structures around the throat impede the airway, a sleeper with obstructive apnea is unable to breathe deeply and regularly. This blockage causes snoring at the very least and an all-night gasping, choking struggle for air at the very worst.

Observing someone with severe sleep apnea is distressing. They may cease breathing for up to a minute as their bodies urgently try to take a breath.

They finally take a massive intake of breath, followed by a few smaller ones, with a choking gasp and sometimes a spasm that sweeps through the body. Their body relaxes, and the cycle repeats itself. 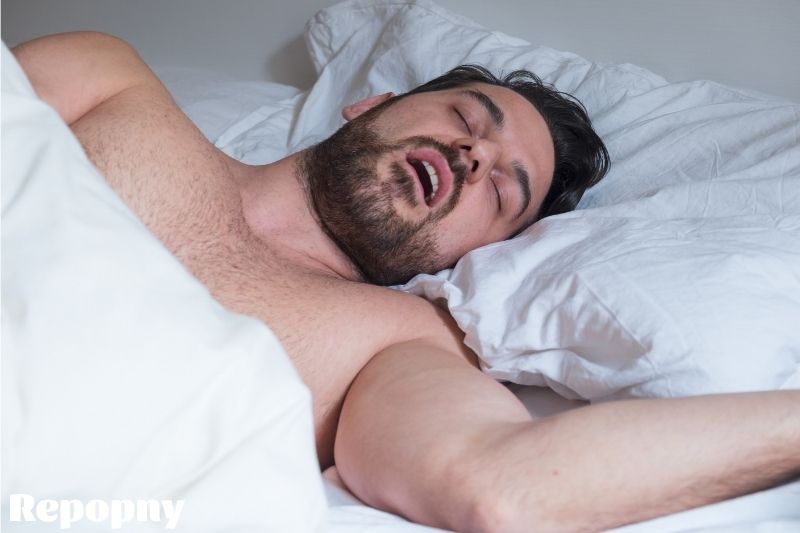 The oxygen concentration in this person’s blood reduces every time they stop breathing. Maybe a smidgeon. Perhaps quite a bit. Every night, their sleep is disrupted a hundred times. Every time they have to fight for breath, they awaken to some degree.

They never get a good night’s sleep and are exhausted and sluggish in the morning. They are drowsy throughout the day and have difficulty concentrating on chores.

The body suffers a tremendous toll due to the battle and oxygen deprivation over time. The endocrine and neurological systems of the body are strained all night when they should be cleansed and healed by a good night’s sleep. The body responds by causing systemic inflammation, which can lead to various health problems.

Causes Of Breathing Stopping During Sleep

Breathing problems caused by sleep are pretty prevalent. Most people are familiar with snoring. While you breathe, vibrations in the tissues of your upper airway generate a distinctive sound.

It’s also feasible to cease breathing entirely for a short period. It is the medical term for these breathing pauses, comes from the Greek word apnea, which means “no breath.” Apnea episodes must last at least 10 seconds to be considered apnea, but they might extend for many minutes.

The sleeping disease known as obstructive sleep apnea is the most prevalent cause of apnea (OSA). The upper airway tissues—the tongue, soft palate, and uvula—collapse into the neck and impede normal airflow, causing OSA.

The chest and belly may still move in an attempt to breathe, but the air cannot get past the barrier. As a result, airflow via your nose and mouth is limited or completely stopped at these times. 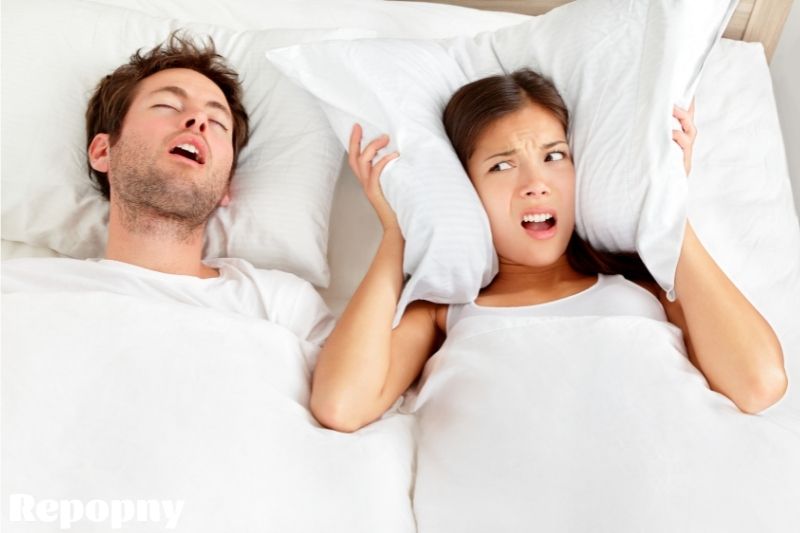 Other less prevalent reasons for sleep breathing disturbances include: They are as follows:

The oxygen levels in the blood decline when breathing incorrectly. When the brain detects short breathing and elevated carbon dioxide levels, it triggers an awakening response.

These awakenings are linked to bouts of elevated heart rate and blood pressure, and in the long run, they can lead to other issues. You can wake up gasping or choking, and your partner might hear a loud snort and movement as you wake up from a deep slumber.

Sleep 5 hours is enough? Read our guide to know more.

When Does Sleep Apnea Become Serious?

It can be mild or severe. Pauses in breathing are considered to occur up to five times per hour in adults and once per hour in children. These occurrences could potentially be a result of typical sleep-stage changes.

The asleep study may diagnose OSA if breathing disturbances occur more frequently. The apnea-hypopnea index (AHI) is used to classify sleep apnea into the following categories: 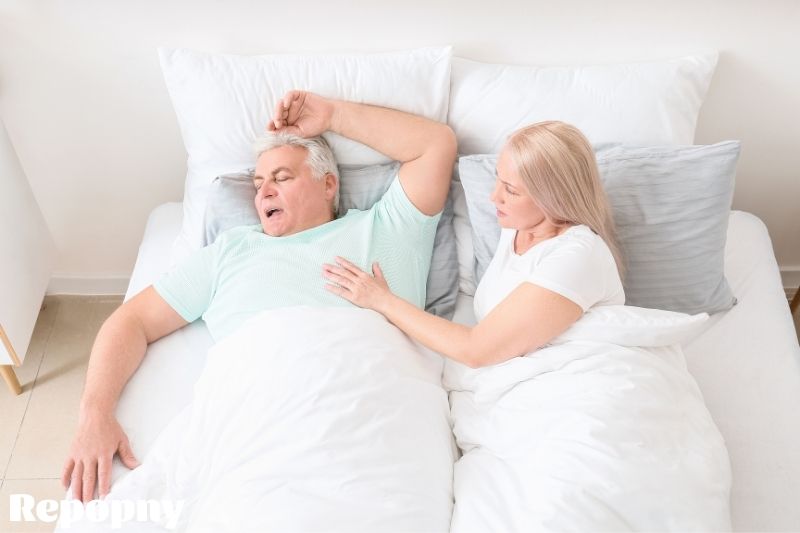 It’s also crucial to understand the degree of oxygen deprivation during these situations. Hypoxemia is defined as a drop in oxygen levels below 90%.

When a person has heart or lung problems, the oxygen levels in the blood might drop dramatically with each apnea episode. As a result, the body may be subjected to more stress overnight. Chronic oxygen deprivation can have short- and long-term consequences.

Another problem that is also cared for is drooling, read the article for more detail: Why Do I Drool When I Sleep?

Can Sleep Apnea Kill You?

The breathing pauses caused by sleep apnea are exceedingly rare to result in death. To put it another way, you won’t simply cease breathing. On the other hand, OSA can put you at risk for a variety of potentially dangerous short- and long-term health problems, some of which can result in abrupt death.

Breathing pauses can cause heart arrhythmia, resulting in cardiac arrest.

There are possible outcomes atrial fibrillation, heart attack (myocardial infarction), and even stroke.

These occurrences seem to rise in the morning when REM sleep is more common and apnea is more likely.

According to studies, people with OSA are 2.5 times more likely to die suddenly while sleeping between midnight and 6 a.m.

The good news is that CPAP (continuous positive airway pressure) therapy appears to reduce the risk of most significant consequences and the likelihood of OSA leading to long-term cardiac issues. 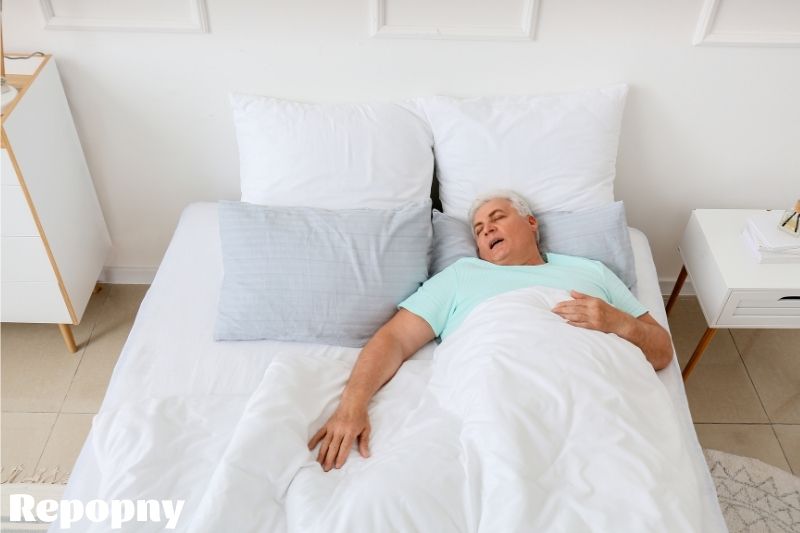 Long-term sleep-disordered breathing has been shown to have profound health implications. It can increase the risk of high blood pressure (hypertension), diabetes, and heart disease.

It’s also linked to depression and memory issues, such as Alzheimer’s.

It makes you sleepy during the day and may cause mishaps.

While OSA isn’t fatal in and of itself, many of the problems it can cause can put your life in jeopardy. As a result, treating apnea is critical for your health.

While the core anatomical abnormalities in adults and children’s sleep apnea are the same, the symptoms and effects are not.

It affects children in the same way it affects adults: their sleep is disrupted and of low quality. However, some of the symptoms in children might be misdiagnosed as willfulness or attention deficit difficulties, making it easy for parents to overlook this medical issue.

Because they have a structural condition that prevents them from breathing and sleeping well, these unhappy children may be frequently reprimanded or drugged with high stimulants.

Despite presenting these indicators during sleeping, a parent may not recognize their child has apnea:

They may consider their child to be a snorer. This child has been trying to get enough air into their lungs all night. The child has the following challenges as a result of the stress and inflammation caused throughout the body, as well as a lack of sufficient sleep:

When Should You See A Doctor?

If you or someone you care about has frequent breathing pauses, you should seek medical help. Don’t dismiss sleep breathing difficulties as insignificant; they can lead to significant problems over time. 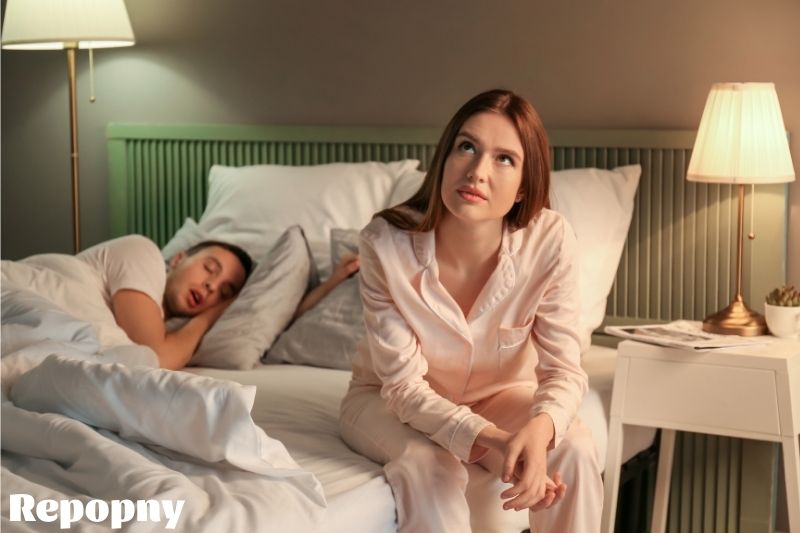 Other symptoms or indicators could indicate the diagnosis, but only a sleep study can provide a definitive answer. Fortunately, effective treatment alternatives are available, including using a CPAP machine or an oral appliance.

Speak with your doctor about the treatment you need to improve your breathing and sleeping. You’ll be glad you took the time to do so.

When I sleep, why do I stop breathing?

It is a frequent disorder in which a person’s breathing stops for a brief while sleeping. It can include loud snoring, breathing pauses, and gasping on occasion.

This has a significant impact on a person’s general health and sleeps quality. Apnea can affect anyone, although it is more common among older, overweight males. 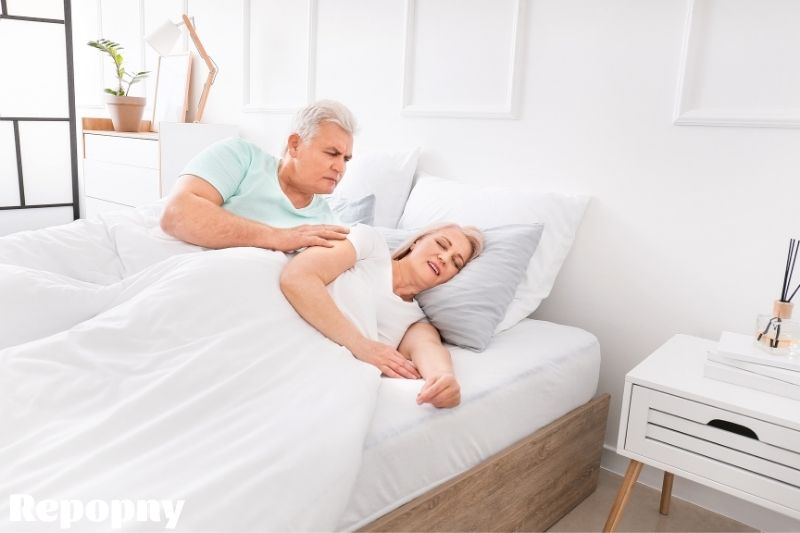 Is it possible to die from sleep apnea?

No, sleep apnea is unlikely to cause death while a person is sleeping. On the other hand, it hurts the cardiovascular system and can raise the risk of sudden cardiac death. If it not addressed, the risk of having a stroke increases.

The cause of sleep apnea in a person should be considered even when you have good vision. If you have been diagnosed with apnea and are suffering from snoring, a noise-blocking device purchase doctor may recommend surgery. Repopny hopes this post will help you to sleep better and get relief from sleep apnea.